Every cloud by Connie Chappell 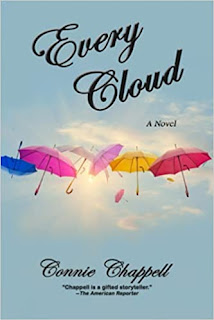 This is Connie 8th book. She has written mystery and family-based drama. She loves outdoor activities like golf, walking and more.

I still have not understood why the novel is called every cloud.

This book is family drama genre. It talks about four siblings and their lives. Jillian, Gus Betsy and Demetri. Their childhood home is called Moorings.

Jillian has had many affairs and losing every man she dates. Also, there have been fire incidents in her life. She decides to come home.

Demetri is a priest who has nightmares. His superior says it has to do with his childhood. He decides to come home. He texts Gus NEED SAM.No sam is not a person. It means summer at moorings. New Zealand is where he lives.

Betsy is married and is bossy. She has been having trouble with her in-laws. Her mother in law does not invite her to her home. So she comes to mooring saying she has come to finish her PhD.

Gus is the person who manages the mooring. He also looks after his fathers' business. There was a friendship between Gus and Moorings. Gus had once told his mother that he wanted to live at mooring.

Then there are sitings of coyotes. Gus and Betsy decide to investigate.

The four siblings all have issues in the present context. They come home to try and solve them.

Artemus Deconcini their father has a huge business. Both of their parents go for a board meeting once a year. After Camilla dies Artemus marries a second wife called Kora. Kora and Gus were the same age when kora was married.

Writing is simple to understand.

The next book that I am going to review is The widow's husband by William Coleman.