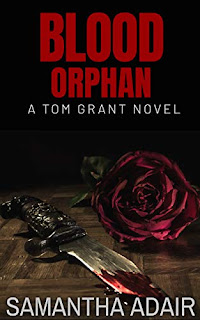 This novel is a thriller. It is fast-moving. In this novel, you won't be bored as one exciting moment leads to the other. There is a prequel to this book called Rock Bottom. But you can still follow this book if you have not read the first one.

Tom is acholic who is given a simple job. Protect Isabella from contract killers. Isabella is a code breaker at a secret intelligence agency. She is given a job of her own. Her own past catches up with her. Both the past of these two are interlinked.

Isabella was abused and torture when she was 13 years old. This has affected her. Also, you can see the chemistry between Isabella and Tom.

There is a car chase through the streets of Paris.

You might wonder who is a blood orphan. We all know who is an orphan. Isabella parents were killed in Russia and she was trained to kill. Hence the term blood orphan.

Both Isabella and Tom are well-defined characters. The details are just right. There is a lot of twits which I like. It seems the author is saying that the past always catches up with you. Writing is simple. If you like Jack Reacher books you will like this also.