The chronicler of the Hooghly by Shakti Ghosal 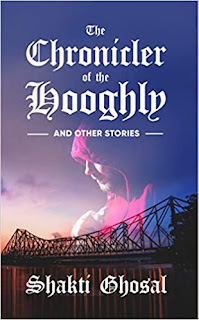 These are four short stories. As the title suggest the location is old Kolkata.The author has mixed history with fiction.The setting is during the British raj in the first story.

The year is 1912. Capital has shifted been shifted to Delhi. Sujit is in government service. Bina the wife is excited and is also pregnant. But the baby is born challenged. He has problems at school. This  story is touching.

The second story is set on the Khidderpore docks. Dipen is a labourer at the docks. There is a pandemic called mahamari. Dipen farther and wife have this . Wife is sent to recovery at her mother's house. While the wife is away Dipen meets a lady called Elokeshi. You might think Dipen will fall in love but will he?

Another story is about Samir who meets a chronicler who tells him about a necklace that is cursed.

The last story is Anjan who is injured in a gas explosion. He meets Savio but he remembers his past demons.

The stories are well written and are on kindle unlimited.
at April 26, 2021