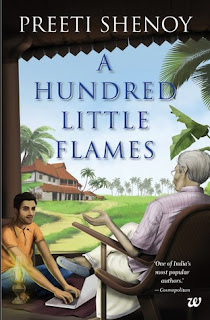 Shenoy needs no introduction. Her language is simple. Her other books are the secret wish list,one arranged murder and many more.

The setting is in a small town in Kerala. At the venture of things is Aryan. He loses his job and goes to live with his grandfather in Kerela. Town name is Poongavanam. Don't look for it on google. It is imaginary.

Aryan comes to live with his grandfather at Thekke Madom. That is the name of grandfather house. It is a plantation sort of set up. There is no internet. I wonder what Aryan would do there. Velu is a person looking after Gopal Shanker (grandfather).

Soon it started to rain in Kerela.One could see paddy fields all around . Gopal's nature was of angry. Aryan calls him muttacha. At first, Aryan is bored but when he starts to talk to muttacha he enjoys himself.

Aryan's father is a headache to Aryan. Always telling how wrong he is and accepting him to listen to his father. Muttaham keeps talking about one rohini. His father says this Rohini doesnoe exist. It is his imagination. But Muttaham speaks with so much force that Aryan does not know whom to believe. Muttaham is also angry with Aryan's father and his aunty. Things change when Aryan reads muttahaam dairy. The story takes  a 360 turn.

The description is amazing. It is on kindle unlimited.