The Emperor's edge by Lindsay Buroker 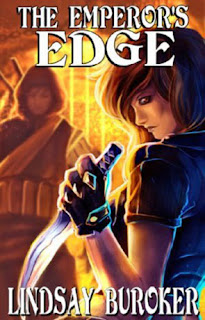 Buroker is a fantasy and science fiction novelist. This is a fantasy novel which will remend you of Rome. This book is the first in a series of books.

Amaranthe : she is one of the patrollers . She is athletic. Hired to kill Sicarius an  assissian she discovers a plan to kill the emperor. Rather than kill Sicarius she sides with him. Physically strong the emperor is attracted towards her. She becomes the target of the potters.

Commander of the Hallowcrest :  He sends Amarathe to kill Sicarius. He pretends to help in the empire-building. But is he something on the outside and another on the inside ? Don't judge the book by its cover.

Story is simple . The story has a decent flow.