Somebody That I Used to Know By Preeti Shenoy 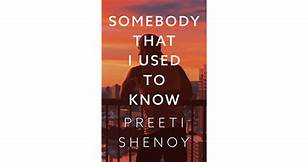 Preeti Shenoy has written life is what you make it, why we love the way we do and many more. She writes about real-life situations. India today calls her her 'the only woman in the highest-selling league since she has sold many copies of her novel.

Though set in London it is about social norms in India. India has a lot of customs and traditions.

This book is about love. Society in India has unwritten laws about whom to love and whom not to love. Like older people loving younger people.

The setting is in London. Akhil Having lost his mother at an early age in India he comes to stay with his aunt in London. His mother died under conditions that Akhil is not sure of.

Joe and Akhil run a company. While taking a break from work Akil goes to India and falls in love with Nithya, his stepmother. Nithya is much young Akhil father. Nithya dies again under mysterious conditions.

I think I have said enough of the story. The writing is simple. There is an element of mystery since Nithya is not mentioned early. I felt this should not have been done since the title is somebody that used to know.