Kabuliwala by by Rabindranath Tagore 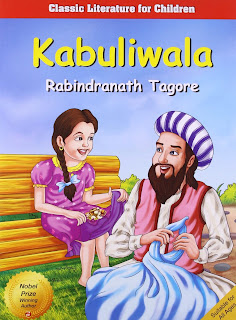 Rabindranath was a Bengali  composer, philosopher and painter.  He is the first non-European as well as the first lyricist to win the Nobel Prize in Literature.

This story is about relationships. A merchant comes to Calcutta every year to sell fruits. He is lonely. When he meets mini he becomes close to her.He has a daughter and maybe that is why he feels close to mini. At first, mini is scared of him but then is seen chattering away with him.  Also mini is talkative. The name of Kabuli Wala is Rahmat.

Rahmat Talks to Mini about her  In-Laws place.. Rahmat about her own daughter when saying this. Rahmat wants to roam the world and thus talks about kings in faraway lands.

Rahmat talks about deserts and people in them. This is a sign that his homeland is in Afghanistan. He is also taking a fatherly role because maybe he misses his daughter. But mini's father only sees Rahman as a fruit walla and gives him half rupees.

I found one dialogue funny. She tells the gatekeeper that the elephant puts the water in his trunk and makes it rain. The mischievousness of Mini, the attire of the Kabuliwala and their friendship is shown perfectly.

After many years Rahmat comes to meet Mini. Does she remember him and still has the same affection towards him. Read this lovely story to find out.