The House On Maple Street. by Heidi Solwinski 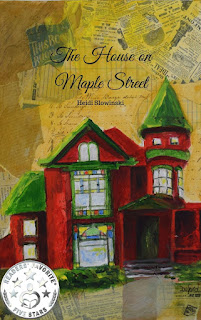 This is Solwinsk's debut book. Her short story can be found on reedsy Prompts. One is called Room 306.

At the beginning of the story, we see Hillary who is looking around for housing. She is doing an MA in fine arts and wants to become an author. While looking around she comes across a sign Maple Street boarding house. The house is Victorian in nature. There is a maple tree.

This is a mystery book. Considering the fact that this is her debut novel it is amazing how well she has written. She does not reveal the actual mystery until the last chapter.

As Hillary meets the other boarders she finds Keith the person in charge of the boarding creepy. The story is creepy but not horror. Solanki gives hints about the mystery so that you can try and solve it.

Dr Immerman who works at JC where Hillary is enrolled is also a boarder in the same house. Evelyn another boarder is looking into the mystery of the maple house. There is a tragic event in the form of an accident or so it would seem.

There are multiple plots in this book. Thus at times, it is confusing. It is written in simple Lan

There are multiple plots in this book. Thus at times, it is confusing. Then there is a young boarder called Robert whom Hillary. He is also a mystery since no one has really met him.

The book is fast-paced and I could not put it down. This book is a must-read for all mystery readers
at January 06, 2020