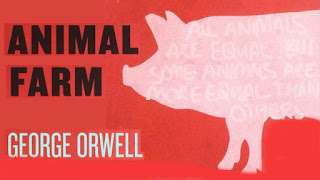 After reading this book i felt like i was reading about Communism. Basically the story is about animals taking over a farm run by humans . The animals are not fed well and have to do lots of work.

The book starts with Major a White Boar giving leture to animals about how life is a misery for the animals.He further says that the misery is due to o nly humans . The reason n being that they use animal products and do not produce their own.

It is declared by the animals that whoever walks on two legs is there enemy.A poem called Beasts of England is sung every time there is a meeting. Soon enough there is a coup and the animals take over. Henceforth there are reading and writing classes. Everything is so organized. There were committees like re-education committee.

Tactics were used to remove animals that came in the way of running the farm. The farm was not called Manor farm but animal farm. The farm was declared a republic. Hence it was decided to have a president. But will the animals manage to run the farm on their own or will they end up fighting and destroying their freedom.

I like the details about how the exactly the farm is organised. 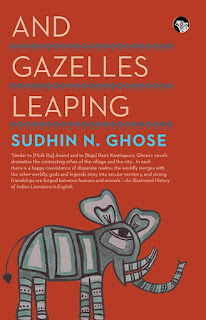 In this book animals and humans co-exist. The setting of the story is in an estate near Calcutta. There is a kindergarten there run by Sister Svenska. The adventures of people living in this estate are given.

I found the book fascinating for various reasons. In the book, it is common for children to have pets. Thus there is a child who has a monkey. Being a monkey he does his pranks. A student in this school called Soetomo has a tiger. It is common for him to go to school on it. The tiger his called his tricycle.

There is a washerwoman called Moti Didi. She calls the protagonist Little Son. The little son stays with his foster parents. The main story is about Mohan an elephant. The little son wants to make him Mohan his brother. There is a gang of thugs who wants to capture Mohan and blind him. The little son tries to save him.

Once when the little son is alone he is beaten up by the thugs. They tell him to let them take Mohan.  He refuses. Somehow he manages to escape.

Also, children were not allowed to go inside a circus. It is not clear why this is so. Then there is a corporation from the school that wants to take over the school. In between all this, there are communal riots. Dead bodies are everywhere. Fires were everywhere. People crying. How will the little son react ?

Overall the book is written beautifully.
at November 18, 2019 No comments:

The Book Thief By Markus Zusak 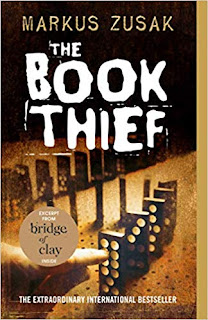 The book opens with Liesel,'s brother dead. Her parents were taken away to concentration camps. Welcome to Nazi Germany. Some of you might feel sad reading this but do read on. This a story of hope and determination.This a story about a nine-year-old -a book thief.

After Liesel parents are taken away she gets adoted by Hans Hubermann and Rosa Hubermann . Hans smoked a lot and Rosa called her a pig when she didn't do anything right. But Rosa did love Liesel .Every night Liesel would have nightmares about her brother. She would see his face.

She picks up  a book the gravedigger handbook which she finds lying in snow. This is her first theft. Her father encourages her to read. Both of them read in the basement. In school, she made friends with Rudy Steiner in school. Both love playing football. When finally she starts getting used to her life an event happens that chang Her parents decide to give refuge to a jew.

Max the jew stays in the basement . He falls sick and nearly dies. Liesel get attached to Max. Meanwhile Books are burnt in Nazi Germany. Liesel still has nightmares about her parents and brothers.

Liesel steals books where ever she finds them. Her mother does laundry for some people.When Liesel goes to deilvery the laundry she finds a library of books there. She steals them.

The Gambler By Fyodor Dostoevsky 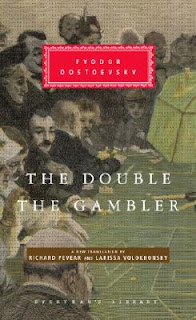 The story opens with Alexey Ivanovitch thinking of talking the children of his employer a general out for a walk. Their names are the Naida and Mischa. Polina Alexandrovna is the stepdaughter of the general. She gives Alexey money to gamble.

The general 's family is waiting for the grandmother to die since they will get her inheritance. This can solve their debt problem. Alexey enters the casino and does not like the atmosphere. He plays roulette. There is a lot of information given on gambling.

The General is engaged to Mademoiselle Blanche who will marry him if he is financially stable.  So she too is waiting for the grandmother to die. The General borrowed money from Frenchman, Monsieur le Comte, so the Frenchman to has an interest in Grandmother dying.

It seems everyone is eagerly awaiting for the grandmother to die. But there is atwist. The grandmother comes to Germany fully recovered. She goes to the casino to gamble. She wins and is addicted to it.

The story is written in a simple manner. Also, you should not gamble even if you are winning. The book shows the realistic side of gambling. Overall it is not a bad read.
at November 02, 2019 No comments: