The White Tiger by Aravind Adiga 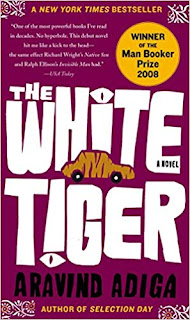 This story is about Balram Halwai. He works in a local tea shop. Next, he lands up as a driver to Mr Ashok who is the son of a landlord. This is his road to success. He kills Mr Ashok and takes his money. With this, he starts a taxi business.

He is called white tiger since a person like that appears once in a generation. He is not only a businessman but also a criminal. Also, he says his family life is in "darkness". The reason being that landlords have a hold over the life of people. Children don't go to school to serve the landlords.


On the other hand  there are Bollywood stars. Urban Indian don't like to see the other  world. In fact, according to  Aravind Adiga killing of Mr Ashok is correct since it is class warfare.


This book won a Man Booker Prize. Selection Day and Last man in the tower are other books by Adiga.
at May 28, 2019