Deki : The adventures of a dog and a boy in Tibet. george schaller 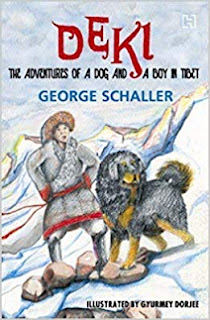 This story is set in the tibetan Platau. Karma is a boy , who is always getting scolded by his family. Many a times he is careless. One day his father sends him to guard their potato fields at night. Karma watches the stars more than the field. Thus many wild pigs come and rooted up many potatoes.

Once when we had taken the goats to graze a leopard came and killed the goat. Karma mother told him to leave the house since his father would be angry with him. So he left .

A Tibetan dog Deki with a “moon on her chest Deki loses his master and finds Karma wandering the tibetan plateau . Thus both began an adventure of danger and happiness. Thus a unique bond is formed between them.  In one adventure they guard a precious statue, with a vicious bandit at their heels. They have to go to  the fabled city of Shambhala.

Deki story carries the scent of blooming poppies and scurrying pikas, and of friends who leave without saying goodbye. This heart-warming story is a tale of friendship, loyalty and family. The illustrations by Gyurmey Dorjee bring alive the story and take readers into the white landscapes and tall mountains of the Himalayas.

George Schaller is an American biologist, conservationist and author. He has also written Golden Shadows, Flying Hooves, The Deer and the Tiger, Wildlife of the Tibetan Steppe and The Serengeti Lion: A Study of Predator-Prey Relations.