The Bible as One Continuing Story of God and His People, NIV by Randy Frazee 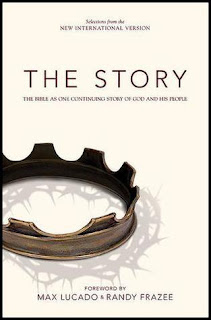 The Greatest Story Ever Told” is more than just a cliché . The Story is an abridged, chronological Bible that reads like a novel. God has gone to great lengths to rescue lost and hurting people. That is what The Story for Teens is all about the story of the Bible, God’s great love affair with humanity. It is Condensed into 31 accessible chapters. It talks about events from Genesis to Revelation. Its text is easy to read.

The Story helps people understand God’s Word more fully and engage with it more easily.  Like any good story, it is filled with intrigue, drama, conflict, romance, and redemption.There is a foreward  by Max Lucado and Randy Frazee: “This book tells the grandest, most compelling story of all time: the story of a true God who loves his children,

There are stories, poems, and teachings of the Bible. It is to be read  like a novel. The book talks about God whose love for his people culminated in his sacrifice of Jesus, his only Son, to atone for the sins of humanity.”

People will be comfortable in reading this book. The New International Version (NIV) translation of the Bible is the world’s most popular modern-English Bible—easy to understand, yet rich with the detail found in the original languages. It has 512 pages.
at January 26, 2019 No comments:

The shadow lines by Amtiv Ghosh 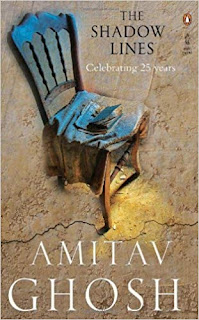 The novel focuses on two families one English and one Bengali known to each other since the time of the Raj. The narrator describes his school days,  by visits with Tridib .It also describes  Tridib's fate in the city of Dhaka during the summer of Bangladesh's Partition, in 1964 and the effects there after.

The Calcutta where the narrator grew up in the early 1960s comes alive from a boy's point of view. Then there is the boy's  cousin IIa , a girl of his own age who comes to Calcutta in between her father's UN postings to exotic cities like Bangkok, Madrid and Cairo.

There is also humour in it.The grandmother, about to visit her childhood home in Dhaka many years after Partition, can only think of her journey as "coming". Her grandson teases her for not knowing the difference between coming and going.

The story is set in a village. Natraj is a printer. Vasu,

a taxidermist moves into the village. He hires the attic

above Natraj house. The man-eater in the novel is no

tiger, it is  Vasu who  kills a number of
.
wild animals.

Natraj constant companions are a poet who is engaged in

writing the life of God Krishna, and Mr. Sen a journalist.

Nataraj tolerates him in his room upstairs till he makes

himself unbearable by robbing Mempi forest of its wild

life and collecting dead animals in his room for stuffing

Vasu threats life of a temple elephant that Natara  has

befriended. The complications ensue that are both laughable

and tragic. This village is near  Mempi hills which is

Vasu is a bully, and is once compared to a Rakshasa ,a

demon . As the story continues,

Vasu encroaches on Nataraj's life, every now and then

bullies away his friends, his customers, shoots someone's

pet dog and many other animals and birds near the

Even if you have a pattern in mind you might not know how to design it. The book offers illustrations which are useful since if you see something you can understand it better. like any other art it follows the principle all designs are based on one or more of the three major patternmaking and design principles-dart manipulation, added fullness and contouring-it provides students with all the relevant information necessary to make designs.

It has all the details of pattern making yet easy to understand. there is a DVD  athe back of the book. This DVD will go a long way in understanding different patterns of fashion. I would call it the bible for fashion Cutting. It will be useful for fashion designing student. It has new techniques for draping and pattern making.


It is an introduction to patternmaking, This book offers everything one needs to know about design and its patterns. It has measurment and standard measurment chart. There is a section on tops pants and jumpsuits. Swimwear section will be useful in summer.

Dart manipulation and desiging with dardts is also given. The book also offers many kinds of tucks like pleat tucks. You will find different types of collars.

This book will help to brush your skills again and will be a great help to learn new methods. The paperback is 664 and has 920 pages.
at January 02, 2019 No comments: