A Thousand Suns By Dominique Lapierre 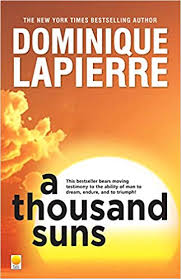 From the author of city of joy comes another best seller. Dominique a journalist has travelled around the four corners of the earth. In this book, he has given his wonderful adventures.

one such story he talks about bull fighting . El Cordoles is a bullfighter who rose to fame and fortune because of bull fighting .Due to television he rose to fame as his events were telecast live. It takes real courage when you are standing face to face with the bull. His body was covered with scars. It is amazing to read about this person.

Another story is about a condemned men on the death roll. This story is touching and you tend to sympathize with the man as waits hoping that the governer will hear his plea and change the death sentence . But he is executed for somebody else's crimes,

In another story Dominique interviews with Ehud Avriel, who helped Jews to escape Hitler's infernos to get to the Holy Land, and gathered together arms to help the fledgling State of Israel survive. He also recounts his interviews with Lord Louis Mountbatten, who was instrumental in negotiating the independence of India and it's partition into the two states of India and Pakistan. These events form part of the background to Freedom at Midnight.

Most touching is Lapierre's recounting of work in Calcutta, which the author was involved in with Indian leper and other orphan children. Lapierre donates half of his royalties to the foundation set up to save these children. His book the city of joy will bring tears to your eyes which is based on the above.

I enjoyed reading each of the stories and i am sure you will too.