Rowing between the rooftop : The heroic fisherman of the Kerala floods By Rejimon Kuttappan 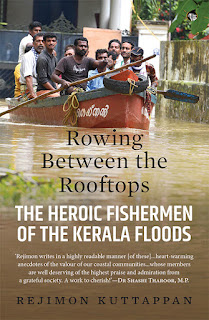 If you thought doctors working in hospitals during Covid are brave men, read about the fishermen of Kerela.

The year was August 2018. The worst floods hit Kerela and the fishermen risked their lives to save people of Kerela. This book is a tribute to those fishermen

The first is the case of Annama. She had 38-year-old physically challenged son, 71-year-old husband who was a diabetic and 96-year-old mother in law. Her house was not only full of water but due to the rains water still flooded their house. Her son,mother in law and husband were all washed away since they were too weak to hold on to something. Fishermen rescued her. But she did not want to leave the dead bodies behind.

Three dead bodies were removed that day. The water according to Annamma was chilling cold. There were a lot of furniture which was wiped away. Despite being hurt fisherman removed the bodies. The boats and the fisherman were from Alappuzha. Annamma still has no answer to a question: Why did these fishermen risk their lives? 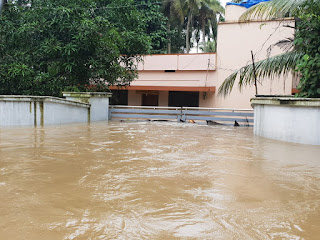 Another story is about Saju. His father was unwell but as soon as he heard about the tragedy he decided to help in the rescue. About 18 boats were arranged. Men from costal areas always carried a plastic bag which had toothbrush soap and change of clothes. This they kept in case they were stranded during a flood,.  But Sanju had no such thing.

In many areas, the rescuers could not understand which is a road and which is a river. There were over six feet of running water. There was an aged man with an oxygen cylinder. They had to transport him also with the cylinder into the boat in a vertical position.  They managed it despite the boat shaking so much.

As you can see the stories show the courage of the fisherman. Writing is simple . This is a non-fiction book costing 299 rs.

This blog post is part of the blog challenge ‘Blogaberry Dazzle’ hosted by Cindy D’Silva and Noor Anand Chawla, and happily SPONSORED BY RRE Studios and SHOWCASE Events.