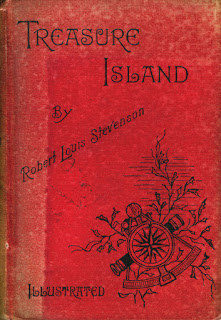 This book is not about just a treasure hunt. It goes deeper than that. On the surface, Jim Hawkins is seen helping his parents run an inn. Billy is a person who comes to stay at the inn. Bill dies leaving behind a treasure map.

Another character long john sliver enters the book. He is a former shipmate of  Billy and pirates. It is believed that sliver will kill all the non-pirates once the treasure is found.

As the story unfolds Jim also grows. He is faced with death and life situations. Stevenson introduces one-legged pirates. Also, Jim tone is one of adolescent's. Emotions are also given when Jim says after his father's death "'our natural distress, the visits of the neighbours, the arranging of the funeral, and all the work of the inn to be carried on...''

Stevenson gives no importance to other peoples tones in the book. Symbols like the black spot are given Also where the treasure is there an X is given on the map.

I liked the Yo-ho-ho and a bottle of rum line in the book. Writing is simple and easy to understand.
at August 19, 2020