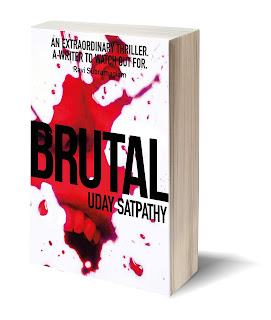 This story has a plot within a plot. It seems there are evil forces at work during the few pages of the book. A School teacher Nitin locks its students and kills them. The reason is not clear. Six students are found dead. Only one seems missings.

This book looks like a mystery novel at first with so many events. Two journalists find themselves in the centre of these events. Refusing to believe things at face value they decide to investigate.

Uday favourite author being Robert Ludlum he tries to have well-developed characters like Prakash. He has been a lot of suffering while covering an assigent in Banka. He has nightmares. Yet he rises to the occasion of his work. Being a journalist who tries to find the truth.

Then there seems to be a terrorists angle. Nitin the teacher is killed by maujahid- e-bashariat a terrorist organisation who claims to have him killed.

With so many plots the reader has to take in a lot of information. But in the end, the reader will connect all the dots and will get the full picture. Don't be discouraged by this as the writing is simple. One can find a hint of Robert Ludlum writing. Individuals working against some powerful forces.

The book has short chapters. Just one more plus point about the book. The book seems to be well researched with information about drugs.

If you like crime-thriller I would recommend pick this book.
at February 25, 2020