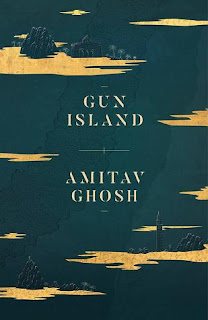 The book starts with a person called Dinu who meets Piya.  Dinu is a dealer in old rare books. They casually talk about a shrine in the Sundarbans. The shrine is dedicated to Manas Devi Goddess of the snake . His curiosity gets better of him and he visits the shrine.

While at the shrine he encounters a king cobra.Thereafter once while on a plane he sees snake outside. Cinta an old friend of his calls him up. The story thus shifts to Italy and then to Los Angles.

There are fires raging in Loa Angles. It is shown that due to humans there is a climate  change.Then there is the angel of human trafficking. If you can manage with so many stories it would make a great novel .Though there are many stories all are interlinked.

Read the book with an open book.  There are tales full of historical and literary references ranging from Tarantism, the Aztecs to the Catholic inquisition.Overall i found the book entertaining.
at July 24, 2019