The Guide by R K Narayan 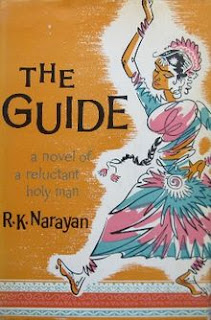 The Guide is a 1958 novel written in English by the Indian author R. K. Narayan. Like most of his works the novel is based on Malgudi, the fictional town in South India.This novel’s lead, Raju, is sitting by a riverside shrine when he’s mistaken for a holy man. In actuality, Raju was just released from prison for forging the signature of a woman with whom he has a complicated relationship. The woman is married to another man but she has a love of dance, and her husband wants her to give up such frivolities. She falls for Raju, who is working for her husband as a travel guide , because he supports her in the pursuit of dance. (One can see the dual meaning of the title as Raju is a travel guide by trade and becomes a spiritual guide to the villagers of the fictional town of Malgudi.)
After experiencing some hard times with the shops left him by his father, Raju finds success by being not only the lover of the dancer but also her Col. Tom Parker (i.e. her promoter /manager.)

Many critics review The Guide from love, sex and marriage point of view. I really don’t know why. For instance, there is not even a single hugging or kissing scene in the book.

The film Guide was released in 1965, based on the novel. It starred Dev Anand as Raju, Waheeda Rehman as Rosie, Kishore Sahu (cameo), and Leela Chitnis in the lead roles. The film's score was composed by S.D.Burman. The movie depicts that in the conclusion the drought ends and Raju dies, unlike the book in which the questions remain unanswered.

The novel was also adapted into a play in 1968. The play was profiled in the William Goldman book The Season: A Candid Look at Broadway.

In 1960 this book received the Sahitya Akademi Award .